Archive for the category “China”

Listen up, folks. The Chinese want the USA to stretch its finances once again in order to assert socialist

control. What do I mean? Look what is happening in North Korea with toy boy leader Kim Jong Un strutting about like a kid with new toys at his disposal and the country propping him up being his granddad’s mate back in the 1950’s Korean War and you can see that there is a testing of the USA’s will and capability to wage a conflict.

I would go insofar to suggest a Sarajevo type scenario is being setup here in order to get World War III kick started.  “On June 28, 1914, a young Serbian nationalist named Gavrilo Princip killed Archduke Franz Ferdinand, heir to the throne of the Austro-Hungarian Empire, in Sarajevo, Bosnia. Taking place against a backdrop of escalating tensions in the Balkans, the assassination set off a chain of events that would lead to the start of World War I barely one month later. To many people, the Great War—as it was known at the time—seemed to come out of the blue, as the European continent was enjoying a long stretch of unparalleled peace and prosperity. In fact, the seeds of the devastating conflict had been planted long before Princip fired those fatal bullets” (History.com) 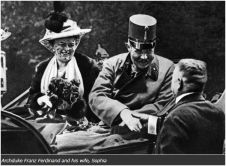 While it has been 5-6 years since the Wall Street bubble burst in the USA it is however an opportune time to press the financial button again with the stock market now ahead of the gains made back just before the 1998 crash. What better time than right now with a blithering “golf priority” idiot in charge of the White House and his equally blithering idiot serfs such as commie loving Kerry and inept Chuck Hagel making insane banal comments.

I believe Terresa Monroe-Hamilton has it about right in her recent comments about the current situation.

Wake up USA, you are heading for another headache only this time it could very well finish you off, especially as you haven’t yet begun to recover economically from two wars that have dragged on for seems an eternity,both of which you lost, now what does that tell you?