Archive for the tag “Communists”

This is a challenge to Fox News team that I’m sure others have issued as well but the challenge is to get serious and expose Obama for what he really is. Check this Keywiki site to show and tell of his disgraceful connections.

I wonder if they have the courage or they just as bad as the left leaning media they are forever bashing for protecting Obama. Come on Fox, have you got the spine? Show some real guts or are you gutless wonders?

Alice Palmer: the woman who got Obama on the road to the White House

for his message is dire for your future but not just your’s but the free world.

Trevor exposed the communists such as Van Jones, Leon Panetta as the communist operatives in the White House. His efforts to bring to light the communist agenda in the USA should not be under estimated. Please connect the dots and see if what he says is true – I beg of you.  Get his message through to media that will not only take notice but be not afraid to by pass the wimpy skeptics such as Bill O’Rielly, Greta Van Susterin etc at Fox News.

In the second half of Trevor’s 25 minute presentation there is a chilling message for what is in store not only the USA but for us down here in the antipodes. The filthy communists are on the brink of breaking out. Why do you think Putin stole the Russian presidency? Why do you think Russia, China and Iran are propping up Syria? Why do you think China has economically and militarily built its presence in Fiji and neighboring islands in the Pacific? Connect the dots before it is too late. You must, it is imperative that you remove that fraud and communist Obama from office in November and put him and his communist goons to trial.

Don’t you see, Joe McCarthy was absolutely right in the 1950s about the communist infiltration and you are seeing the effect of his silencing in the form of a left leaning media that is determined to see their man remain in office. Just look at how they are allowing the filthy liar Sen. Reid to get away with his lies about Romney not paying tax and the atrocious attacks upon Michelle Bachman for exposing the treacherous Muslim Brotherhood connections with the White House. You needn’t rely on Fox News to expose it all for they remain silent as the lambs when it comes to most of it for they are wimps, afraid of being labeled “birthers”.

Get your act together and wake up before you are gobbled up by the evil Stalinists.

Update to Obama, the man who never was.

WND are reporting that one of President Obama’s photos on his Face Book page is actually a fake and the reasons why are given. This should come as no surprise for Sheriff Apario’s special posse now confirms Obama’s Long Form Birth Certificate is definitely fraudulent. 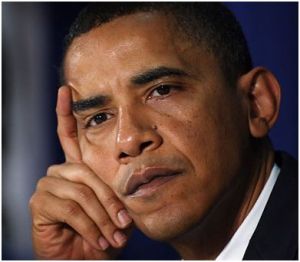 Film maker Joel Gibert commissioned an art expert to analyse the photo and the results can be found here.

Wake up America! The Fundamental Hope and Change that “red diaper baby” Obama promised you last election is happening because you did not do due diligence on this fraud. He is a manufactured man that has been planted by the Communists. Get your heads out of the sand before it completely buries you.