Hey, America! You haven’t, by any chance, put a snake in your pocket? 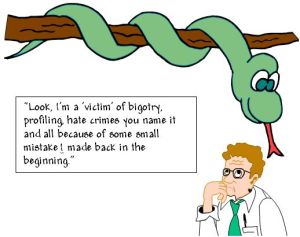 There is more to President Obama’s leftist leaning than you might think.

Once Upon a Time… a very Nice Person was walking through New York’s Central Park and it became nightfall. As our person had not yet arrived at said destination, a little fear and trepidation began to set in when who should be there right upfront in the middle of the path?  Why, but an old snake who said, “I am cold! I am in need of assistance. If you will put me in your pocket to warm me up, I promise to always be your friend and get you out of here.”
Our person replied, “O my, but aren’t you a Snake? I mean, you could seriously hurt me!” To which the old snake countered, “Look, I’m a ‘victim’ of bigotry, profiling, hate crimes you name it and all because of some small mistake I made back in the beginning.  But listen, the ACLU won my case, so now it’s a Hate crime to think of me like that!  Look, you can trust me and besides, I will be your FRIEND for Life!!”

No sooner did Nice Person go to reach for the snake, it bit her/him. Falling backwards in abject horror, Nice Person cried out, “YOU SAID YOU WOULD BE MY FRIEND AND GET ME OUT OF HERE! NOW, LOOK AT ME, I WILL DIE!

To which that old snake replied, “You knew what I was when you picked me up, tough luck!”’

Want to know more? I know the Kool Aid brigade don’t but if you want an in depth look at Barry, oops, I mean Barack Obama’s communist association then delve into Trevor Loudon’s blog at .