Thought for the week

I guess the blogosphere is running red hot with opinions regarding the Newtown, CT massacre which is understandable considering the seemingly callous nature surrounding the killer’s actions. 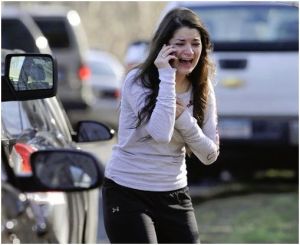 It does not matter that logic should need to enter the discussion surrounding the siren call for gun control which started within minutes with the US President overtly pushing for such in his crocodile tear filled eyes (he supports the barbaric murder of partial birth canal children but sheds tears over 6-7 year old children – condescending idiot) and of course the cacophony of stupefied voices coming from people in the media and entertainment circles who invariably either employ heavily armed guards or carry a side arm themselves. Just one word is sufficed to describe such – self-serving hypocrites.

It matters not to those with an irrational approach to the real cause of this and other such like tragedies that the first victim of the killer’s rampage was his mother who was an alleged “prepper” (an idiom for those preparing for some doomsday event that the entertainment media are fond of promoting to sell their sensationalist idiocy) with a stash of weapons and ammunition she and the killer regularly practiced with; or that she was struggling to find help for her Asperger afflicted son being reportedly reduced at times to lock him in the basement for protection. Who knows what flashed through his fragile mind when he found out that his mother was planning to have him institutionised? Maybe this was the trigger that caused him to let rip with such devastating consequences.

Oh, never mind, you liberal twits who want the 2nd Amendment nullified for your own selfish reason in that the law was working perfectly in this instance, for the killer was refused permission to purchase a fire arm by the authorities just days before because of his known mental state and maybe, just maybe, that caused a fit of rage due to denial and that he may have thought “everyone is out to get me” type thoughts.

Here is something else to consider: Connecticut has some of the strictest gun laws in the US that along with many other states prevents guns being carried on school premises even if they are trained in firearms use and also employed a lockout containment foyer much the same as banks use which meant he had: A) easy sitting duck targets and B) had to force his way into the complex. Maybe if someone had access to a firearm they may have had opportunity to avert the disaster at the foyer, for killers by and large do not like being shot at.

But the real elephant in the room in this woeful segment of USA history is nihilism. It is the progressive removal of God of the Bible from government, life, school, sport, entertainment et al that can be traced back to the mental state of people such as this and other killers in life. After all, if there is no God, then who are you to say what is evil and what is good? Yet, the moment such an evil spectacle like this occurs the very same people who want God removed from their life shout and scream evil, forgetting or simply ignorant that there cannot be anything evil unless there be that which is good. God is the epitome of good despite the atheist continuous straw man rant which means you do that which is contrary to His word such as murder then you are committing that which is evil.

I came across a blog that included these comments from a one “Nate13”. He hits the nail on the head about this event and other such events that have plagued the US in recent years and, might I add, in my own country of New Zealand as well as Scotland, England, Norway ad nauseam. Nate13 writes:

These events are products of sick, evil people in an increasingly sick culture that has no stomach for “outdated” concepts like absolute right and wrong. We believe if we could just pass enough well-worded laws, we could eliminate this behavior from society. We treat these tragedies as outputs, thinking that we can just tinker with the inputs enough to get our desired results.

For God’s sake, the bodies were still warm and we were already talking about piles upon piles of statistics, as if the problem of violent gun crime could be solved mathematically with some study or Congressional inquiry. I’m afraid that, absent the presence of morality in our discussions of these murders, we have no tools to solve the underlying problems except legalism and policy making. People will keep fixating on the problems with guns because we’ve become woefully inadequate at talking about problems inherent in humanity.

It always amuses me in pitying way when I hear people retreat even further into nihilism after an event like this by making that old appeal to the “Argument of Evil” which asks, “If there truly is a good god, why does he allow such evil deeds?” As if the very presence of evil invalidates the possibility or under-pinning for good!

Forgive my frustration, but what right do we have to even speak about evil in our society? We are so immersed in violence, greed, sex, instant gratification, and materialism that we’ve lost all sense of what evil even looks like. To know evil, you must first know good. And while we work ourselves into a righteous huff over “evil” for 2% of the year when these disgusting acts occur, for the other 98% we desperately try to rebel against all forms of conventional morality – that cramps our style, doesn’t it?

A child one minute before passing through the birth canal can have a pair of surgical scissors put through his or her brain without society batting an eye. A fully formed, breathing, crying, desperate, helpless baby who is the result of a botched abortion has no entitlement to life in parts of this “enlightened” Western world. And we talk about “evil”?

Government officials pass guns to cartels to slaughter civilians, and we get to talk about “evil”?

Corrupt businessmen get to use their connections to the power brokers in Washington to access public funds to bail out their billion dollar corporations (who went broke in part due to unbridled greed), and we sit here and talk about evil?

We can start talking about “evil” when we as a society find our lost sense of “good”. But we can’t relegate morality to the fringes, then demand to know where God was.

One thought on “Thought for the week”