Are We Really Getting To The Truth On Benghazi? 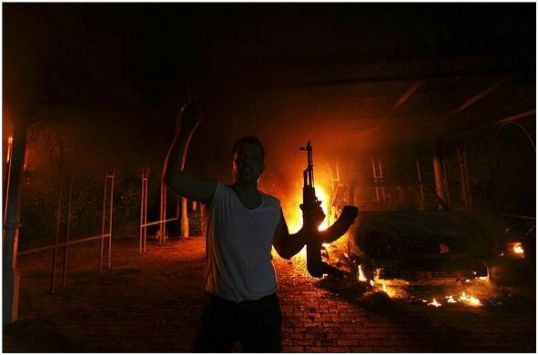 General in a sex scandal (did the FBI have the goods on him to keep Petraeus quiet? Hmmm) not to mention that he left a “gay” man whom he had appointed as his ambassador to Libya (I wonder how he goes down with the sodomite brigade?) maybe it is time people started really asking the questions put forth by The Independent Sentinel

The WH has not been forthcoming. They released minimal information in piecemeal fashion and some government officials blatantly lied without suffering any repercussions. The most important questions have gone unanswered and the administration refuses to provide answers.

Consider the questions that are left unanswered:

Who changed the talking points used by Susan Rice? She had access to all the accurate information, so why did she repeat what she knew to be inaccurate?

Why did it take President Obama until mid-November to admit he sent Susan Rice out to relay the faux talking points on the Sunday News Shows on September 16th?

Why did our President not follow up on this attack given a US Ambassador was involved? He never even made a call to find out what happened. Where was Hillary Clinton during this attack?

Why did it take the FBI weeks to get to the site and why was the FBI investigating and not the CIA since this was not a criminal matter, but rather a terrorist attack?

Why isn’t Congress being allowed to interview the survivors and why are they being refused critical documents? What happened to our balance of powers?

Why was there no retaliation or response against the terrorists from the administration as promised? Why did we ignore the suspect arrested in Tunisia?

Why were we told officials were fired for the Benghazi affair when they were merely transferred or furloughed?

The report by the Accountability Review Board harshly criticized the State Department and cited systemic failures, but Hillary Clinton was and is being praised for her her work as head of state. How is this possible?

The response as to why the consulate was left undefended prior to the attack is inadequate. Blaming funding problems when there were sufficient funds and saying it was a mistake doesn’t cut it. The administration knew there were terrorist training camps in the vicinity.

Time to get real serious, don’t you think?