Archive for the tag “Earth”

The following statement caught my eye in this morning’s Timaru Herald: “plague on the Earth”. It was uttered by the documentary maker/environmentalist Sir David Attenborough, 86, in his latest rant about the world’s flora and fauna being endangered by man’s over population of the earth. He says “either we limit our population growth or nature will do it for us.” He cites famines as nature’s source of population control. Of course we should expect no less from the patron of the Optimum Population Trust, an organisation (England’s leading charity, apparently) setup to help in the fight against so called climate change. Yes, you guessed it; in amongst the fray there is the modern father of climate change/global warming whatever, Dr. James Lovelock and friend of that nutcase on the British throne, HRH Prince Philip and his equally nutty son HRH Prince Charles who are on record stating more-or-less the same rhetoric as Attenbourgh. It is not the first time such inflammatory and idiotic statements have been issued by these predominantly well heeled, white Europeans, for George Monbiot has an excellent take on these nutters here http://www.monbiot.com/2009/09/29/the-population-myth/

We have our own home-grown version of such a mind-set here in New Zealand, Dr Gareth Morgan. He is a man of humble origins who is very good at maths. I went to school with this guy back in the 1960’s in Putaruru although he was a year ahead of me. We shared a very good maths teacher by the name of Jack Sumich and I guess Morgan soaked up his knowledge like a sponge because he went on to become a very wealthy man (good on him, too) having gained a PhD from Wellington’s Victoria University, worked for the New Zealand Reserve Bank and founding the highly successful economic consultancy firm Infometrics Limited among other things then rising to such a status that he is now called upon by leading news organisations in New Zealand for his take on the country’s and world economic situation. By the way, New Zealand’s version of EBay known as TradeMe was invented by his son Sam with a little help from his mother and sold for an astronomical sum of $750 million to Fairfax News of which Morgan and his wife reputedly received $50 million of that sum which gives you a background perspective of this family and its new money of which they use as generous philanthropists of The Morgan Foundation. 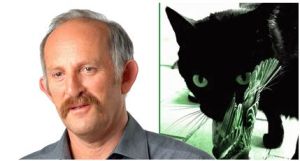 Of course Morgan had a reputation as an outspoken go getter at Putaruru High School and Sumich was a man prepared to whip your hide off with the bamboo cane for serious wrong doing (those were the days of legalised corporal punishment; not this namby pamby age we are now subjected to) and therefore a man to be feared. One wonders whether some of that rough and tough boy mentality from Sumich rubbed off on Morgan for the latter is certainly on record for exhibiting forceful and rambunctious no holds barred views throughout the past few years. Which leads me to his latest rant on his newly created website Cats To Go. He says that cats should be exterminated from New Zealand because they are killing off the native bird life. Naturally, this high-spirited attack has ruffled feathers in the cat fancier’s realm but to me it has highlighted the stupidity that invades a person that has nothing better to do with their time because they have no financial worries and it seems they have a whole lot of time on their hands. You see, up until five or six years ago, Morgan was a sceptic of man induced global warming belittling anyone that dare raise their head above the parapet to suggest there was such a thing (my guess is he didn’t want to bite the hand that fed him). Then, out of the blue, he changes his position and joins up with another global warming alarmist nut, the journalist Rod Oram becoming a pro-climate change nutter going on crusades to Antarctic and sub Antarctic expeditions to save this bird and that insect et al because of evil men pumping CO2 into the earth’s atmosphere out of his exploitative sense of greed. I guess that is the price of money and fame.

There you are. That is what jumped out at me this week in the antipodes.